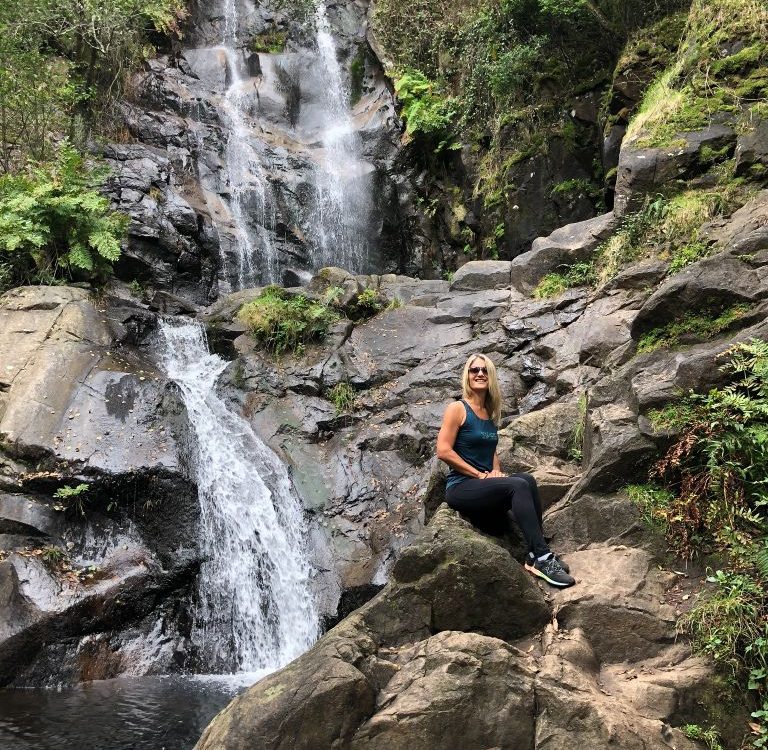 We decided to visit the Artisan food and craft market in Penela which is a 1hr 15min drive each way from our casa. I didn’t want to drive such a long way just for a market so teamed it up with a hike to a fabulous waterfall. After a short visit to the market we visited the wonderful Aromáticas in nearby Espinhal for brunch. This cafe/restaurant is run by a lovely couple and it was the very first time that we have eaten a full English breakfast since relocating to Portugal 21 months ago! It was delicious and the perfect fuel in my tummy for our nature hike to the stunning tranquil waterfall.

Full English breakfast at Aromáticas = Fuel for the hike

This beautiful waterfall is located near the village of Espinhal in Penela within the mountain region of Serra do Espinhal. You can start the trail at 2 points. The first point is near the village of Espinhal and this is the route that we took. It is a 3.5km walk from Espinhal village to the waterfall and back. The first part of the linear route from the village to the Ribeira da Azenha picnic park is around 1km long and follows a dirt road with not much to see although we did stumble across a friendly dog, a herd of goats, gigantic slugs and a tiny snake. The road is a dirt track but you could drive in a car as the road is not too rough so a 4 X 4 is not needed. Once you reach the picnic park you follow the forest path alongside the Ribeira da Azenha. The signage for the trail is very clear and easy to follow and there is plenty of shade from the trees. The views and scenery from the picnic park to the waterfall are very pretty. It is full of lush green forest vegetation and as you are following alongside the stream you pass many small waterfalls gushing over granite rocks and you continuously have the sound of tranquil running water to listen to. There are also cute wooden bridges, old water mills and ruins to explore. A totally enchanted forest experience.

Although the trail is short, I would consider it moderate difficulty mainly as many areas are very steep incline up rocks which requires effort especially if you have short legs like me (ha ha). The rocks and stones which you need to stand on are muddy and some are covered in moss which makes them extremely slippery especially if wet. I would not attempt this trail if it was raining or heavy rain the night before as it would be too dangerous. It was a dry day in October when we visited but areas were wet from a trickle from the stream. We wore casual sports clothing and trainers for footwear but I would recommend walking boots with a sturdy grip. Also bear in mind that you may need to place your hands on dirty rocks and the ground. I certainly had to do this and got quite muddy in the process. This doesn’t bother me as I always wear cheap workout clothing that I don’t mind getting dirty. Don’t go in a dress or any clothing that you are precious about. This route and terrain is definitely not for small children or people with any form of mobility difficulty. The steepest part near the waterfall has a safety support rope so you can hold on to it. I wasn’t expecting much so I was very surprised when we reached the waterfall as it was 25 metres in height and breathtaking. I assumed that there would be a few people at the waterfall as I saw a couple of cars parked in the picnic car park but we were the only ones there again so had the whole place to ourselves which was very romantic. It’s a good job that it was deserted as I forgot how much baked beans make us fart and how much farts echo off rocks (ha ha). The area by the waterfall is quite small so I imagine it would get very busy and crowded during the summer months. Just around 10 people would make this area crowded so probably best avoided during the high peak tourist season. Below the waterfall is a pretty rock pool which would make a fantastic plunge pool and be delightfully refreshing to take a dip on a summer’s day but not in October. We spent some time here admiring the magnificent view and listening to the silence except for the sound of gushing water cascading down the rocks. A very calming and soothing experience. I always say that waterfalls never look that impressive in photos. With nature I feel one needs to actually be there to appreciate the glory.

On the way back we stopped at the picnic park for a rest, to drink some water and explore the area which has a quaint wooden bridge with flowing stream beneath it and old ruins. A beautiful spot for a Portuguese picnic, if only I hadn’t just eaten a full English breakfast (ha ha). Everything is covered with moss and ivy so it looks very magical and mystical. I had fun looking at the names carved into the tree trunks and watching the local wildlife – dragonflies, butterflies, lizards and many birds. It was very rewarding to take a rest and enjoy the scent of the forest. Apparently the smells of a forest have healing properties and there are many fragrances to enjoy in this forest. You can park your vehicle and start the trail from the Ribeira da Azenha picnic park. As I mentioned before, although the road to this picnic area is a dirt track it is drivable with a regular car but we wanted to walk the longer route and burn off some of the calories from our full English breakfast. If you start the trail from the picnic park it is only a 750 metre walk to reach the waterfall so a round trip of 1.5km. The waterfall is part of the PR2 PNL trail so once you reach the waterfall you have the option of continuing onto the river beach of Louçainha. The PR2 PNL starting at Espinhal village is 6.5km long (13km round trip). If you start at the Ribeira da Azenha picnic park, you will only have to hike 3.5km each way (7km in total). We did not continue on to the river beach due to timings as we had planned to meet up with friends for paddle boarding.

After our waterfall experience we drove onto the glorious Moinho das Freiras in Pedrogão Pequena to meet up with some fellow Bristolians for paddle boarding fun along the river Zêzere. They had 2 friends visiting from Bristol so it ended up with 6 Bristolians paddle boarding and kayaking down the river which is not a sight you would see often in Central Portugal. It was Gert Lush!

The Trio of T.Shirts

It wasn’t until I returned home and I was looking through my photos that I discovered that hubby changed his T.Shirt 3 times during the day! And they say women are fashion conscious and high maintenance (ha ha). There is a good practical explanation behind his multiple wardrobe changes. His first T.Shirt was just a regular cotton one so too hot to hike in so he changed into his dri fit T.Shirt for the hike. After the hike we got into the car and I made the mistake of being honest but apparently honesty is NOT the best policy. I said that hubby’s shirt smelt like ass so he changed into another dri fit top for paddle boarding. I also didn’t realise until I got home that the slogan on hubby’s first T.Shirt says “Exercise is highly addictive, Don’t start” and I was wearing a shirt that said “Can’t stop, Won’t stop” which is hilarious. His second shirt is his “Saints” shirt as he is a massive New Orleans Saints (American football) fan. I call this shirt his “All Saints” shirt which annoys him senseless as apparently that is a 1990’s girl band (ha ha). The third shirt is non-eventful and needs no explanation. It was a dri fit shirt which didn’t smell of ass and the only clothing that he could find in the car boot that didn’t smell bad (ha ha).

The waterfall is amazing and definitely worth visiting if you are in good physical fitness and enjoy rough and wild nature with an essence of calm and serenity. It’s a short hike for such a rewarding and beautiful sight. You can also admire the waterfall from a viewpoint near Carvalha da Serra but I love to be right up close to high waterfalls to listen to the sounds, inhale the aromas and watch the white frothy waters tumbling down and the glistening light bouncing off the rock pool below which is so very picturesque. Don’t forget to bring a picnic! 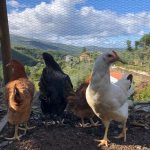 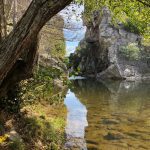 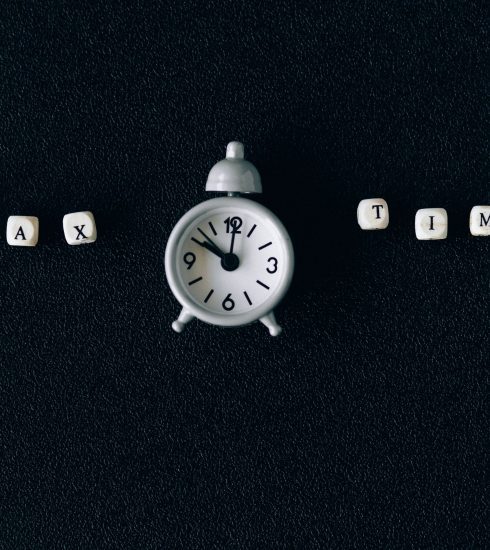 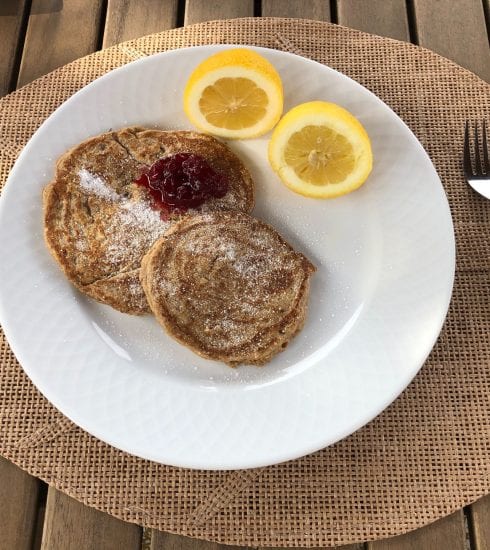 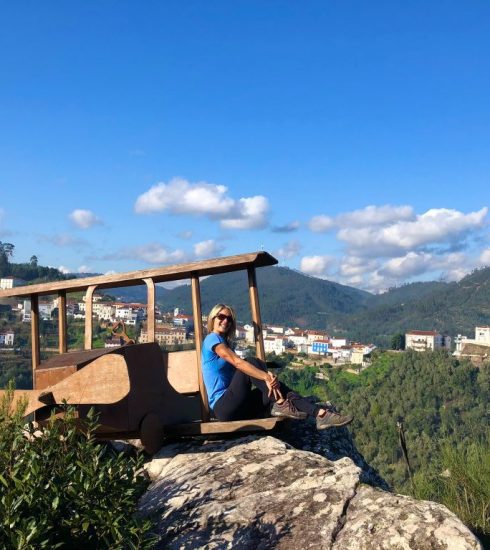