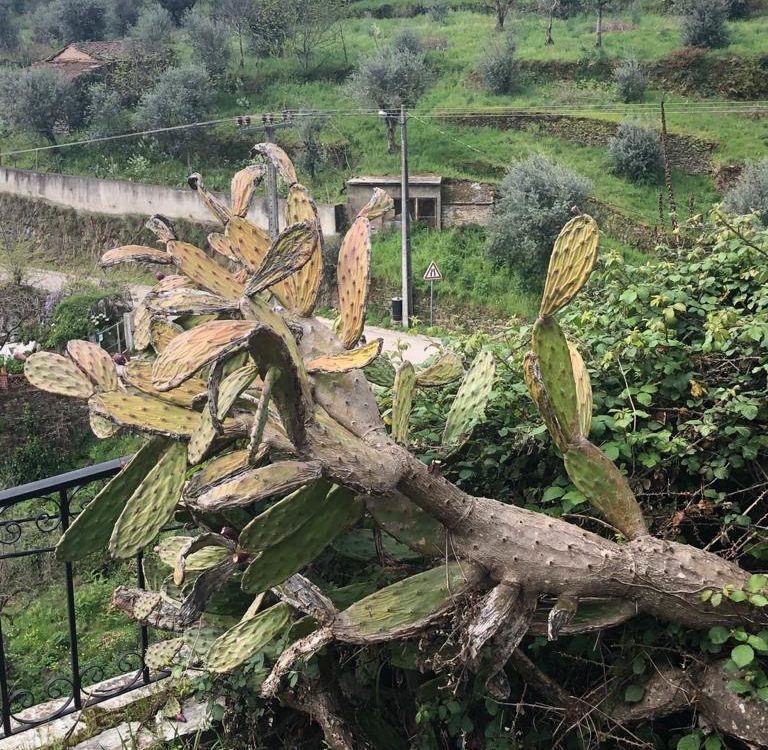 The weather was absolutely gorgeous over the weekend so we decided to continue working on the garden. The plan was to finish off the upper front garden on Saturday then continue on with the ruin in the secret garden on Sunday. I should know by now that every time we set an estimated task completion time then we fail. Everything just takes 5 or 10 times longer than anticipated because something unexpectedly crops up. The task in the upper front garden was to lay down some black plastic sheeting and recycled pebbles for a walkable pathway and weed the borders which are home to some lovely shrubs and trees.

What the heck is a Prickly Pear?

We did not anticipate a fight with an Opuntia Ficus Indica (Prickly Pear). For those of you who don’t know what a prickly pear is, it’s a perennial, succulent plant, which resembles a gigantic cactus and bears little fruits (which are pear shaped and look like figs or small grenades!). They are found in warm, dry climates and despite the name they are not related to the pear family and are classed as a fruit and vegetable. The green flat pads/paddles, flowers and fruit are all edible. The red fruits are often called tuna fruit – Spanish for Cactus fruit. They can be eaten fresh and raw as a fruit if you want to die, just kidding (ha ha), you can eat them fresh and raw or you can cook them and make jam, jellies, juices, sweets, syrups and liquors.

Each prickly pear fruit is loaded with high levels of dietary fibre, potassium, vitamin C, B-family vitamins, calcium, magnesium, copper, taurine, flavonoids, polyphenols, and betalains. The green pads (vegetables) are edible all year round whereas the fruits are not. Prickly pear is apparently also used for medicine: type 2 diabetes, high cholesterol, obesity, alcohol hangover, arthritis, colitis, diarrhoea etc. It is also used to fight viral infections. They are toxic to dogs so something to watch out for. You have to be careful when harvesting them due to what I call the Spiky Joe’s.

They are low maintenance, drought tolerant and grow very easily in Portugal. You see them growing everywhere. Over the years ours must have fallen over and partially taken root from the side of the trunk which has resulted in a half dead prickly pear now blocking a stepping stone pathway leading down to the garden. These steps are not necessary as there is a central point in the middle with steps so we are not sure why they are there. I don’t like to dig up any living plant that is 50% dead as it also means it’s 50% alive. I usually like to wait until it is definitely 99% dead then I admit defeat. Until then I blame it on various things like too much watering or not enough watering.

We decided to remove the prickly pear as it was taking up a lot of space on it’s side and was not growing well without a proper root source. We also removed the unnecessary stepping stones which were more of a trip hazard than anything else. There is still the challenge of chopping down the dead tree which will give us even more space but that will have to wait as we don’t have the tools. I am considering either paying our local handyman or buying some type of circular saw as it will be handy but I am concerned that one of us will lose a limb as we are very accident prone. Hubby already stood on the spade and cut his shin! Maybe not a Chainsaw purchase as I need all four limbs to function fully! By removing the Prickly Pear, stepping stones and dead tree, we can free up the soil and have an area to plant some edible crops and we still have a prickly pear growing further down on the side of our wall, embedded into the rock face of the hillside. I reckon one of the pads must have dropped over the wall at some point and they seem to grow really well from where they just land and take root, a bit like teenagers! It amazes me how I can plant seeds and have to tender to their needs and care for them like a baby and most get eaten by pests but these prickly pears just grow without any care. That’s nature for you!

An irrelevant rant about weeds

I had a conversation with hubby recently on one of our nature walks: Who is it that decides a weed is a weed and not a plant or flower? I’ve seen some beautiful weeds growing in hedges and walls on my walks. Some weeds flower, are pretty and the bees love them. Also when we use the word ‘weedy’ we think of puny, small and weak. I don’t know why as all the weeds in my garden are strong as F and outgrow anything I plant – just a thought. There is a saying, “A weed is a flower that grew in the wrong place” I totally agree with this – can you tell I have too much time on my hands? (ha ha).

Poem – why not, you have nothing else to do if your reading my blog (ha ha)

Whose land is it anyway?

The proof is in the pudding

I took a couple of cuttings, just in case I fall back in love with this plant but I’m not holding my breath. You can use the plant for compost but you need to take care as the spikes may still be evident once composted, shredding helps. Hubby volunteered as chief guinea pig and tasted the fruit which is supposed to taste sweet like a melon. He said it was really bland, I politely passed on the experience as my digestive system is somewhat already impaired. I think prickly pears are a bit like marmite, you have a love or hate relationship.

Digging out this prickly pear was an absolute nightmare. We got spiked so many times not by the huge visible spikes on the pads but from the tiny barbed bristles – hair like spines (I think they are called glochids) that somehow embedded into my hands like splinters through my gardening gloves and worst of all through my leggings into my ass! They are incredibly hard to remove, difficult to see and can leave irritation for days. Someone told me that they can even spike you through leather and denim jeans. It’s a bit too hot here in Portugal for hubby to wear his leather hot pants so he’s hoping for a cool autumn later in the year to strut his stuff (ha ha). Also I was told that only fire fighter gloves work but unfortunately I do not know of any Portuguese firefighters here – I know damn shame, I like a man in uniform!

No pain no gain

I was going to title this section ‘Hardcore Helen’ but hubby advised me against it – ha ha. I obviously meant the hardcore as in intense, extreme and committed not anything rude! I like to think of myself as having a high pain threshold, I can do needles (have tattoos) and have given birth as a teenager to a 10lb baby in a birthing pool with zero pain relief drugs but this was something else, like a whole kind of craziness pain. Hubby got the tweezers and tried to get one of the spines out of my hand and I bloody screamed for England and Portugal! My voice kind of echoed around the hills and vibrated around Vinhó. Wherever you are located in the world you would have been able to hear my screams far and wide. I screamed less when I found the snake. I have a habit of screaming or dropping the ‘F bomb’ every time a random Portuguese person strolls by which isn’t very often in this rural village. Anyway just as I screamed a lovely old lady walked past and was very startled. Hubby just looked at her and sheepishly shouted “Boa tarde” and she just stared at us for an uncomfortable long time then returned the greeting. I am mildly embarrassed and now the people in my village must think I’m crazy!

The worst was yet to come when hubby had to spend over half an hour picking out the ‘Spiky Joe’s from my ass with the tweezers! I had over 20 nicely evened out over both cheeks! It’s a good job we are close, god bless him. Not only did I get spiked but it was 30 degrees so I also got the luxury of mild sunburn even with factor 30 sunscreen on. Needless to say I didn’t get a good night’s sleep and there’s still some ‘Spiky Joe’s in my butt! I think this will be one of those memories we will laugh about in years to come or a story to tell the grand kids. Apparently they do a spineless version of the Prickly Pear, I assume it’s just called ‘Pear’ or maybe ‘Unprickly Pear’ (ha ha).

Update and after photos

Hubby purchased and let me use a Chainsaw!!!!! I am still with all 4 limbs but there was one close shave (ha ha). Here is me chopping up the prickly pear for our compost bin. We now have cabbages growing for Caldo Verde where the prickly pear used to live. 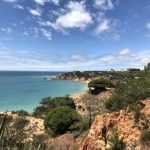 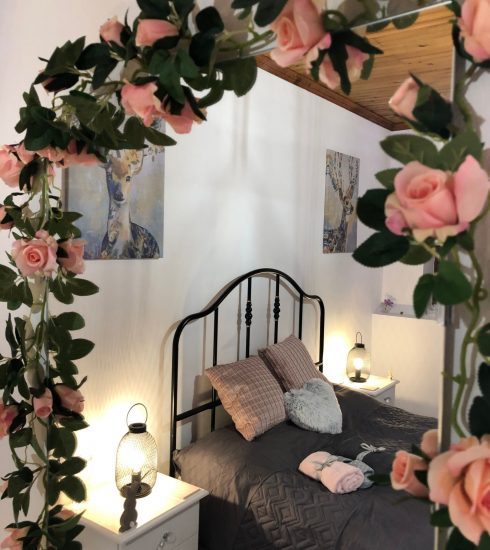 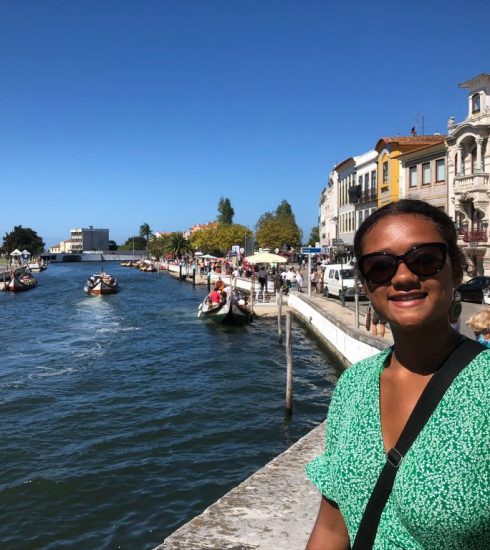 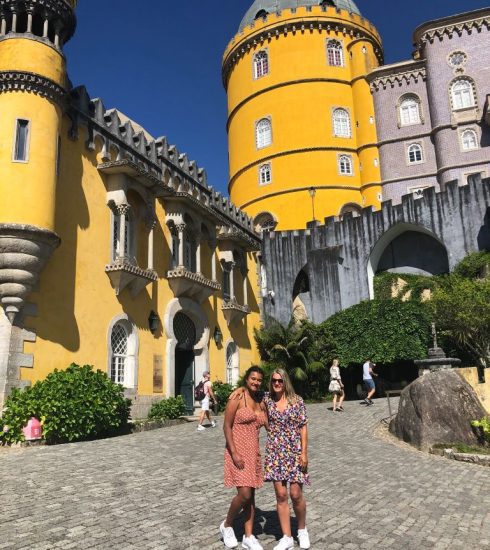