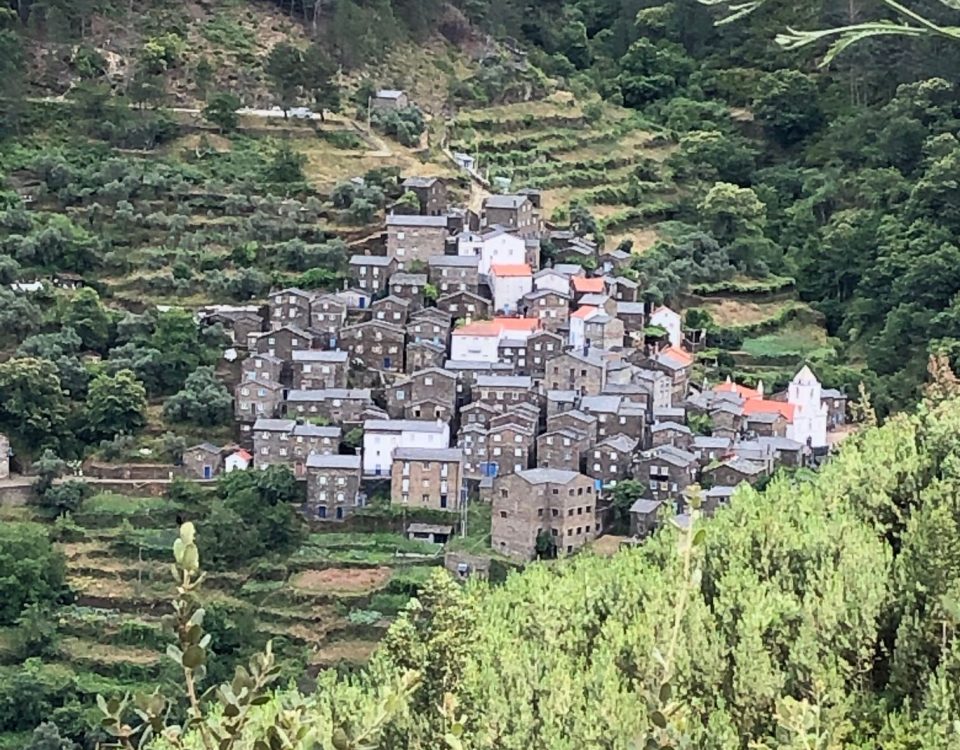 I am very excited to write a post titled “A trip to …………” as we haven’t had an actual sight seeing day trip since we arrived here nearly 6 months ago. We have had a day trip to Coimbra but we had chores and shopping to do so not really a sight seeing adventure day. Covid 19 put a temporary stop to us exploring this beautiful country. This has helped us in some kind of weird twist of fate as we have been able to plough our energy and days into renovating the house and garden. Now that Portugal is returning to some sense of ‘normality’ with the easing of lockdown (Desconfinamento), we decided to take a well deserved break from all the DIY and go and explore a local charming little historic shale village called Piódão and stop off at another local attraction along the way back: Fraga da Pena (waterfall). We really want to visit a couple of places further a field including Nazaré but have decided we may as well put these on hold and experience them with our daughter when she visits in August. You will definitely need a car to visit both of these places as the areas are quite secluded.

Today, we woke up early, packed the car and then the car would not start! I knew it was only a matter of time before our old 18 year old car let us down. We spent over 3 hours trying to get the car started. Hubby phoned everyone we know local to us (that’s 2 people – ha ha) and knocked on neighbours doors but no one was in or around. Hubby tested the car with hand held machine thingy and carried out various checks then he cycled to a nearby petrol station to buy jump leads. The petrol station staff gave him a number for a local mechanic ‘Fernando’ but he didn’t answer the phone (probably out having fun on a Saturday!). Then I got that Abba song in my head ‘Fernando’ and I’m still singing it at 8pm!

There was something in the air that night
The stars were bright, Fernando
They were shining there for you and me
For liberty, Fernando …

Then we flagged down a random car with a Portuguese couple who spoke a little English – thank god! but the jump leads did not work at all. We concluded that the battery was completely flat and after a few google searches realised that it could be a number of things not just a flat battery so we phoned the breakdown service which we have with our car insurance. The lady on the phone spoke good English but unfortunately the mechanic did not. By the time the mechanic phoned us hubby had managed to start the car by cleaning off the eroded connection to the battery so we cancelled the breakdown. We originally planned to visit Piódão and Fraga da Pena but because of the car fiasco we decided to just visit Piódão then try and buy a new battery for the car.

I had read horror stories that the journey is through quite a lot of dangerous narrow roads, lot’s of twists and turns with no barriers/guard rails and steep drops! Actually we have driven far worse journeys than this in Portugal as often our sat nav takes us down the crazy ridiculous death routes. The only thing that bothered me was the twists and turns as I get motion sickness in cars.

Piódão (pronounced Pee-Oh-Dow) is only a 35 min journey from our home and 22.5km. Piódão is considered one of the most famous beautiful historic villages in Portugal. It is a small village based within the Arganil municipality and surrounded by the Serra do Açor (which is a protected area). It has a river beach, museum, church, chapels and many hiking trails. The church which is dedicated to Our Lady of the Conception is a stunning white wash with huge cylindrical towers and beautiful tiles on the inside (I have a thing about Portuguese tiles – just love them!). Apart from the church the entire village is almost made from Schist, even the floors. Great for clumsy me (ha ha). We had so much fun getting lost in the quirky little steep sloped village winding streets and viewing the cute schist houses with blue doors, windows and slate roofs in the stunning rural mountains. It’s like a crazy little maze. Why are all the doors and windows painted blue? It’s a great mystery unsolved but apparently it is because living in an isolated village it was difficult to travel anywhere else (I know that feeling) and the one shop in the village only sold blue paint. I am thinking my dad (a Chelsea football fan) would love living in this village (ha ha). The river beach is pretty and I did enjoy watching a group of semi naked young men jump into the freezing cold water and scream.

Piódão is nicknamed “village crib” due to the layout of its houses on the hillside and the atmosphere that it gains when night falls, the houses are arranged in the form of an amphitheatre. Due to the lack of space, the houses were erected in height, not in length. It is also described as a nativity scene because the layout of the houses. From a distance it does really look like a miniature city made from lego surrounded by green luscious hills and valleys. The view of the valleys and mountains is absolutely breathtaking, nature at it’s best. Walking around this village you would not know that it is 2020 if it were not for the odd person wearing a face mask! It really is a little village frozen in time, truly magical.

Historically agriculture was its main source of income and farmers grew crops in the Acor hillsides. Agriculture is still a part of the village’s economy, but not as much as it used to be and it is supported by tourism. Piódão was once an ideal location for fugitives from justice. In its museum, you can learn about the village’s customs and traditions. Many villagers nail crosses made from bay tree above their doorways. The crosses have been blessed and ward off evil spirits.

What to see and visit

The Church of Nossa Senhora da Conceição (Igreja Matriz) – origin dates back to the 18th century.

Lunch at a local restaurant.

Grilled tripe is a typical dish of the region. It is stuffed with meat and rice. It’s not something I relish in sampling as it reminds me of my childhood and a neighbourhood friend whose dad used to fill their bath tub with raw tripe to feed their alsation dog. That memory and pungent aroma is etched into my mind and nostrils forever, so tripe is not for me. It is also quite famous for it’s potato bread, mountain cheese, honey and liqueurs. There are many souvenirs and handicrafts you can purchase: miniature model houses, basketry, spoons and wooden bowls, slate and sheep skin products but I like the sound of the cheese, honey, chestnut cake and liqueur. I really enjoyed the old Portuguese man singing out of tune as he sold his baskets.

Overall we had a great afternoon in Piódão. There were some construction works going on by the church which you can see in the photos. This made parking very difficult but we managed to find a parking space just around the corner on a grass verge. I would have rather visited in the morning when it was less busy as it was difficult to social distance when passing by others in narrow streets. Saying that it wasn’t that busy and no where near as busy as many UK attractions. We had a discussion after our visit and although it is a beautiful historic village, it did not have the wow factor for us. This is probably because we live in a small mountain village, similar to Piódão. If you are used to living in a city or visiting from abroad I am sure you will find it interesting and enjoyable. It’s a free attraction and parking is free so you only need money for food, drink and souvenirs. I do wonder how the residents feel living in the centre of a huge tourist attraction. I would personally hate living there in a goldfish bowl scenario but I bet the house prices are sky high.

When we returned to our car it again would not start! It was a nightmare and eventually hubby managed to get it started with the jump leads and we headed straight to an auto repair shop to fix it. I think all the car fiasco did impact on my day and enjoyment. When we arrived it was shut as it closed at 11.30am on Saturdays. Lucky for us there is a petrol station on site and Pedro helped us out by calling a member of staff from the auto repair shop who came out and fixed our car. I love Pedro but he didn’t speak any English so again we were a bit lost in translation. We now have a brand new battery and connector and fingers crossed José Miguel (our car) will live to take us on many more day trips to explore all the wonderful attractions of Portugal. We stopped for a really late lunch/early dinner in Arganil and shared a pizza. I am getting used to having an egg on my pizza but this time there were peas! I’m not sure this will catch on any time soon.

I love this place so much I returned with my daughter during her 2 week holiday here. 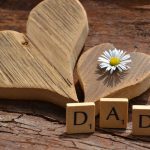 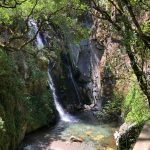 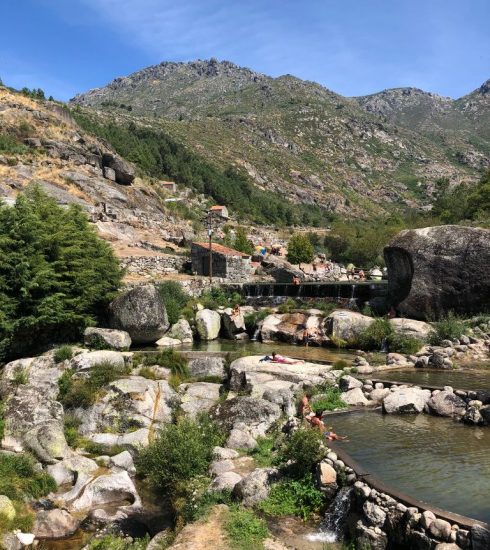 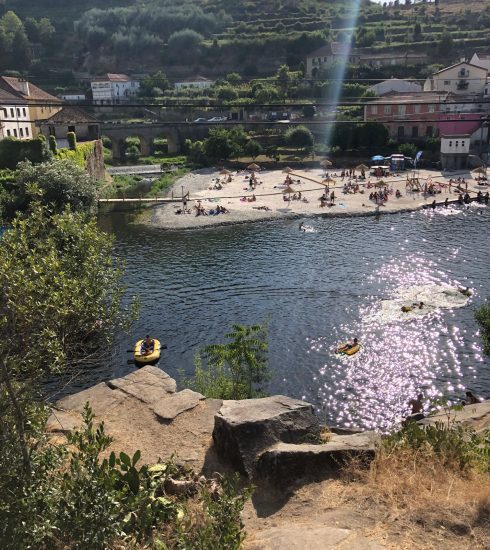 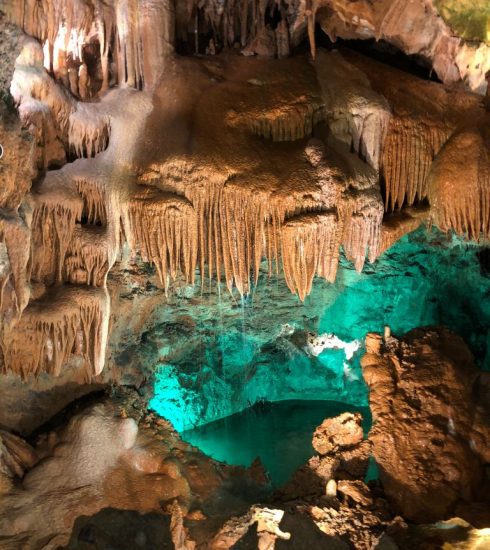