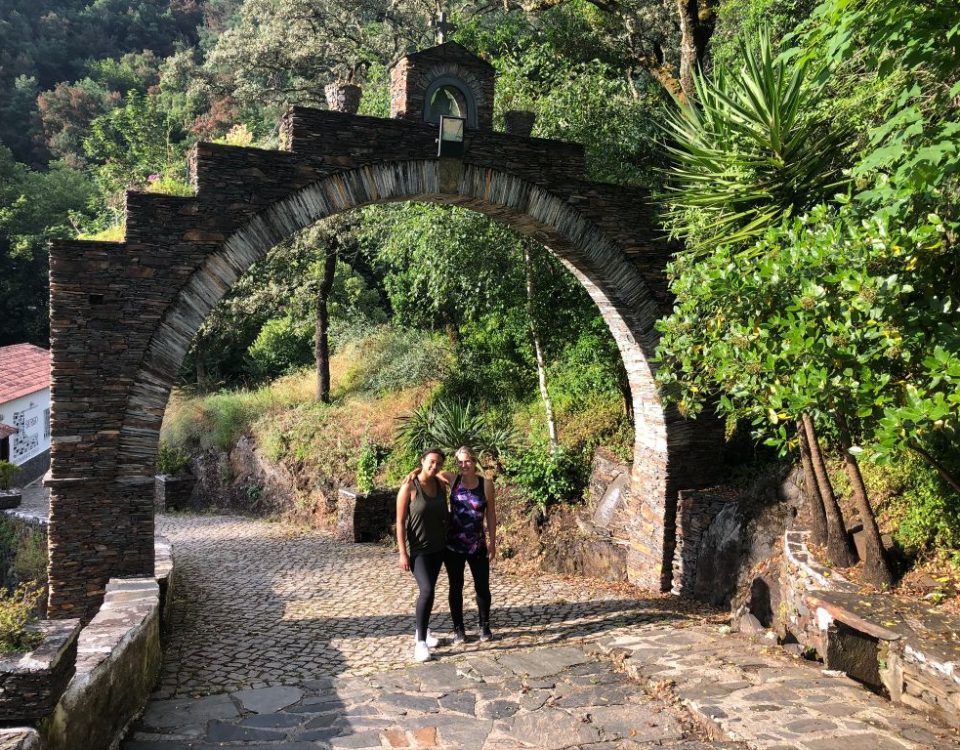 I love hiking and we are spoiled for choice with so many different hiking trails in Portugal. Back in June we ventured on the beautiful PR2 LSA circular Schist village hiking trail in Lousã. We parked our car in the free car park close to Lousã Castle and started with a wander around the castle before embarking on the trail. Lousã castle was empty and we were the only ones in the car park and the castle apart from the member of staff manning the castle. He looked a little bored and was reading a book, I think he was happy to receive some visitors. Little did he know we are the crazy Brits with the weird ass questions (ha ha). Also known as Arouce Castle, it forms part of one of the first defensive lines created in the second half of the 11th century to control the southern accesses to Coimbra. In the early days of the Portuguese monarchy, the place played an important role as a frontier settlement. In 1124, an Islamic invasion took the castle, and when it was once again in the possession of the Condado Portucalense, it was awarded a charter by King Afonso Henriques in 1151. We had fun exploring the quaint and picturesque castle and I particularly liked the cute metal spiral staircase.

After exploring the castle we started the trail and it soon became apparent that we were following the wrong route! We wanted the short PR2 6km route which runs along the slopes of the Lousã mountain connecting Lousã Castle and the Sanctuary of Nossa Senhora Piedade with two of the most iconic schist villages of these mountains: Talasnal and Casal Novo. Luckily we discovered that we were actually following the longer routes of PR3 and 4 which would result in over 8 hours of hiking! I wasn’t physically or mentally prepared to hike 8 hours and would certainly need more supplies than just water, I’d require at least a pack of 6 pastel de nata’s (ha ha). We decided to return to the castle and quickly found the notice boards with maps of the available routes so we were soon back on track in no time. There is a PR2.1 trail which shortens the PR2 if you prefer an easier shortened version.

The trail is a journey back in time as you retrace the steps that the ancient inhabitants of these mountain villages took on the only access they had to descend to the village of Lousã. The trail is classed as easy difficulty and it isn’t too hard but it was a hot day and some of the trail is steep ascend which is hard work in the Portuguese heat with a backpack. There is some signage along the way but in my opinion it’s not great signage and in all honesty we did get a bit lost. It’s a lovely hike and we saw so many butterflies and charming sights such as a rustic stone chair, cute bridges, fontes, pretty waterfalls and schist ruins. There is a stunning Alta Cruz monument where we sat to reflect and relax for a while whilst admiring the panoramic views. We eventually made it safely to the quaint schist village of Talasnal where we found a water drinking fountain to top up our supplies and made a pit stop at a cute little cafe with spectacular views and a friendly cat. There are quite a few tourist accommodation options here and some even have little swimming and plunge pools. I was tempted to dive in fully clothed to cool off then run off as fast as my chunky legs would take me (ha ha). We even saw 2 trail runners near Talasnal who looked extremely hot and exhausted. It was challenging walking over all those uneven stones and I tripped a few times so I have full admiration for their effort in running. I would have tripped and broken my neck if I attempted to run.

When we left the cafe our trip went downhill a bit, no pun intended (ha ha). Clumsy accident prone me slipped and fell. I was hiking down a path of rocks which were covered in moss and I just went flying. It all happened in slow motion for me and as I fell my main priority was to not land on my back and bottom as I had spinal surgery to remove my coccyx a few years ago and the surgery failed and resulted in chronic pain in this area. As I fell I tried to turn and flip my body over, bear in mind I was carrying my iphone at the time as I was taking photos of the fantastic view. Anyway it was all a bit dramatic, I screamed and managed to turn and flip a bit like a fish. I hit the rocks with my left hand side and hip then kind of bounced off the rocks and landed on all fours (my hands and knees). It hurt like hell and god only knows how I didn’t fall off the side of the pathway and kill myself or break a bone. I also miraculously managed to not drop my phone and still have it in my hand. It was covered in mud especially in the battery charging hole but fully intact a bit like myself! Luckily I managed not to get any mud in my holes (ha ha). Hubby and Teanna were upfront so didn’t see the accident unfold but caught the epic ending. It was quite bad that they didn’t even laugh, they were genuinely concerned about my wellbeing and safety and I think they were panicking that they might have to carry my fat ass back a few kilometers or that Teanna would have to use her Duke of Edinburgh Bronze skills to construct a makeshift stretcher out of twigs, leaves and abandoned underpants (ha ha). To be honest I very nearly had my own code brown incident and was so close to having to abandon my own underpants after that fall! Luckily after fighting back a few baby tears and wiping the blood from my cut hands I was fine to continue but lost a bit of confidence and had to hold hubby’s hand a lot for the remainder of the journey. I had the most epic bruises for a while, I was black and blue as I bruised like a Portuguese peach!

The trail is mostly narrow forest mossy pathways and as there are many little creeks and waterfalls the ground underfoot can become very slippery so I would advise wearing hiking boots and not trainers like we did. Shortly after my fall we were faced with a dilemma, multiple fallen trees from the crazy recent storms. We tried our best to make a path through but there was no safe way to continue. We stood for a while debating our situation and it was here I saw a fallen tree trunk which resembled a dinosaur! Such a coincidence as the day before we visited the dinosaur footprints in the natural park. We also spotted some crazy yarn bombing on a tree in the middle of the forest which was weird yet wonderful. We were a little gutted but took an alternative route which was very enjoyable and ended at the pretty Senhora da Piedade River Beach. We didn’t meet another soul until we reached the schist village of Talasnal. This is really becoming a trend now having all these hidden gems and glory to ourselves. Despite my fall we had a spectacular adventure on the trail. It really is a beautiful hike right in the heart of nature and it felt like I was walking through a medieval fantasy world. Serra da Lousã is such a lush green area due to the extensive rainfall and has so many different hiking and cycling trails. I will definitely be returning to hike some more routes with hubby, this time with walking boots which have good tread (ha ha). 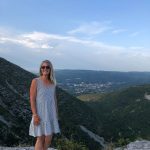 STAND UP PADDLE BOARDING IN PORTUGAL 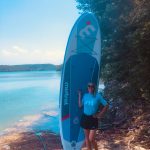 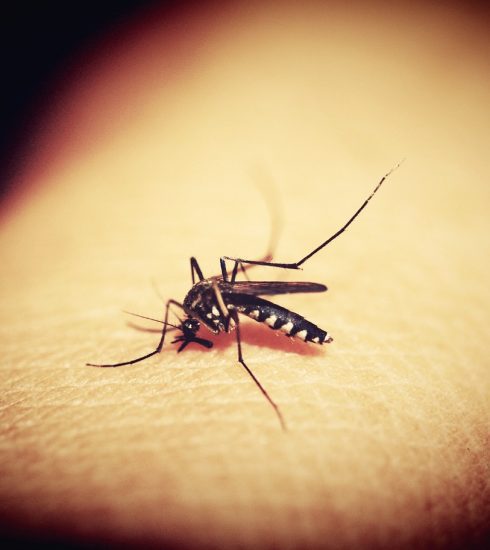 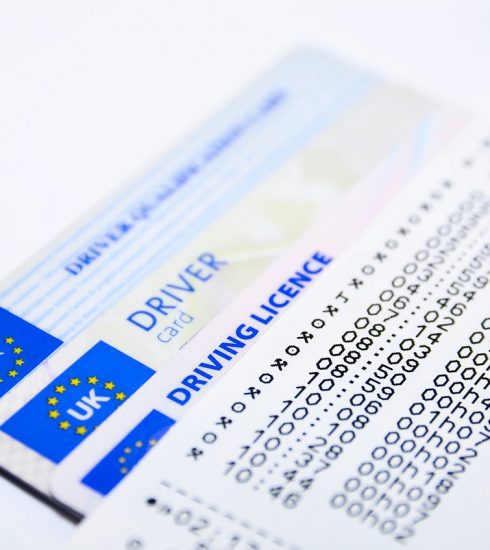